The 2009 edition of the Forward Music Festival (FMF) provided plenty of action, fun and a few surprises. This was our first time at Madison’s indie music event of the year and we thoroughly enjoyed the experience. Starting with Thursday night’s showcase headliners Megafaun through Ra Ra Riot, YACHT, Low, Andrew Bird, Wavves and everyone else in between, FMF appealed to the growing independent music fan base emerging across the country.

Virtually none of the artists at the festival receive any commercial radio airplay at all. But, they do inhabit a growing number of internet music blogs/sites that have become the new wave of digital marketing. Andrew Bird selling 2,000 tickets at the Overture Center may give a wake-up call to local media on the emergence of independent music. Indie is not just for hipsters anymore.

Ra Ra Riot headlined Friday night's sold-out showcase at the High Noon Saloon with enough drama to keep everyone interested. Starting with the opening band Princeton, who started an hour and a half late because of a missing drummer, the music schedule kept getting delayed as the night progressed.  Former Wisconsinites, Archie Powell and the Exports, who now call Chicago home, were up next followed by Madison's Flatbear. Margot & the Nuclear So and So's were reduced to an acoustic duo, due to the other band members attending a funeral. The word from hardcore fans at the front of the stage was that the band had broken up, but didn't want to cancel.

Ra Ra Riot evidently tried to pull rank on the event by insisting they start before midnight, according to their contract. They basically forced Madison-based band Sleeping in the Aviary to switch slots with them and then didn't mention it during their set. When Ra Ra Riot finished their gig, two thirds of the sold-out crowd left, thinking the showcase was over. Sleeping in the Aviary soldiered on and put on a blistering set in front of a small crowd of die-hard fans. We like to call it the PBR shower as both band members and the audience sprayed each other with Milwaukee's finest brew. 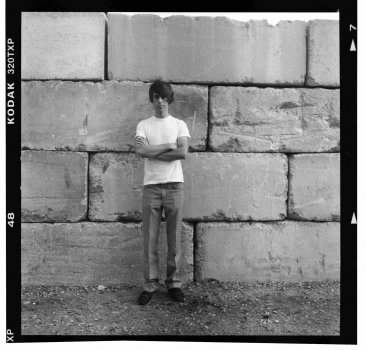 Band/artist name: Zach Vinson. There are a couple other guys who play with me from time to time. I keep trying to come up with a clever name for them, but I’ve got nothing.

What current projects are you working on? I released a full-length album called “Cracked Open” in November 2008. Lately I’ve started doing some writing for an EP that I’m tentatively planning on recording next spring.

Megafaun at the Forward Music Festival

It’s easy to come up with witty banter on Megafaun’s stage demeanor; Jed Clampett on Acid, Beards are Us, The Nephews of ZZ Top. But, when it comes time to describe the music, only one word is needed; Phenomenal!

Megafaun headlined Thursday night’s Forward Music Festival show at the High Noon Saloon in Madison and provided a unique experience that was both musically intense and entertaining.

The Suburban Home Records showcase featuring Two Cow Garage, Jon Snodgrass and Austin Lucas hit Madison on 8/25. An early 6pm show at the High Noon Saloon was attended by a small, but enthusiastic crowd. The format for the evening was different than most showcases, with the musicians playing both collaboratively and solo throughout the evening.

Chicago-based indie label Bloodshot Records has been celebrating its 15th anniversary with a series of free live music showcases across the country.  The Bloodshot Beer-B-Que made a stop at the High Noon Saloon in Madison on 8/22 with Justin Townes Earle, Waco Brothers, The Bottle Rockets, Deadstring Brothers, Bobby Bare Jr., Ha Ha Tonka and the Meat Purveyors in tow.