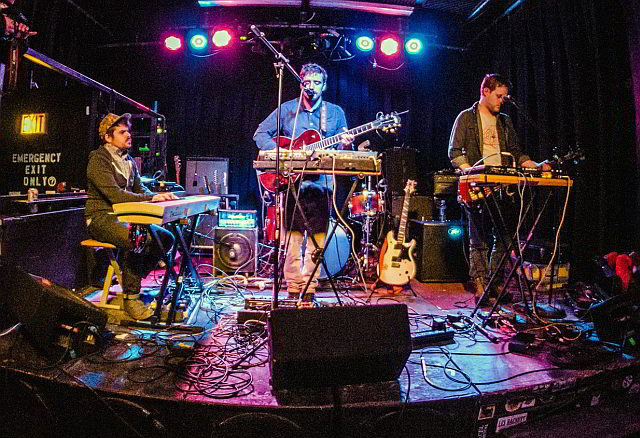 Willie Hughes was doing a solo gig when we first encountered his Double Ewes persona in Austin, Texas. We were crazy enough to put on a SXSW showcase featuring Wisconsin bands circa 2011 and Willie was even crazier to drive down and perform at the event. Double Ewes’ carefully crafted loop-driven sound tapestries stood out among the indie-folk laden atmosphere of SXSW that year. Little did we know that Hughes would be inspired to collaborate with Jeremy Nealis and Max Jewer back in Wisconsin to make the project a trio and eventually put out the first Double Ewes album in 2014.

Since that time the tape loops and MIDI sequencers have been running rampant at Hughes’ farmstead on the Rock River just outside of Janesville and Jewer’s North Side Madison practice space/recording studio. Three years of endless jams and multi-tracking have produced a new album called Dead Furrow in homage to Hughes’ farming background.

Bassist and electronic percussionist Max Jewer took time out from band practice to talk about producing and mixing the new album. How does Double Ewes put together these majestic layered soundscapes?

“Sometimes it’s just a single loop. It could be some sort of pitched noise loop that we stumbled across,” says Jewer. “A lot of times we record our practices to tape and then we’ll slow them down, speed them up, grabbing little snippets and turn them into loops. We did that for a couple of songs on the new album. There’s a track called Quarantine that was built off this crazy descending noise loop that Willie sent me. I structured a lot of the track around that loop.”

“Another way that a lot of stuff came together for this album was just jamming,” explains Jewer. “Our set-up in the studio is all MIDI Sync if you’re familiar with that. So, all our loops and drum machines........ all lock together in perfect loops. We start jams for ten or fifteen minutes and see where everything goes multi-tracking the whole thing. We’ll go in after and basically find the good bits, loop them out and turn it into a song.”

“Most of the vocals were overdubbed,” explains Jewer. “Some friends of ours, Justin and Alex from Wood Chickens, came in and helped with vocals and live drums to fill out the sound. I was really inspired by TV on the Radio for this album. The way they mixed drum machines and live drums together.”

The excitement around performing the new album live is evident in Jewers’ voice as he talks about the upcoming release show. The erratic schedule of having a real farmer as a band member weighs heavy on his mind.

“We’re limited in the kind of shows we can accept because of Willie’s farming schedule and the unpredictability of the weather in relation to the harvest and planting season,” says Jewer. “We have certain windows of the year where we can do shows, but pretty much say no to just about everything that comes our way which is hard.”

Now is your chance to catch a rare live show by Double Ewes. The album release show Friday at the Crystal Corner Bar will feature a five-piece version of the band with Justin and Alex from Wood Chickens lending a hand. The all local bill will also include Damsel Trash, Cave Curse and a solo version of Tippy.

By the way, the parking lot where we first saw Double Ewes at SXSW is now a high-end condo development in true Austin gentrification fashion. Pass the hummus and Texas barbecue please!