Madison bands perform at SXSW in search of the elusive buzz? 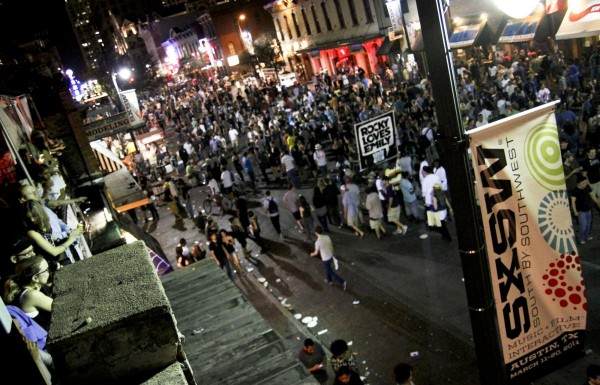 Proud Parents, Disq, Seasaw, Slow Pulp and Labrador are gearing up for a trek to Austin.

SXSW may have lost some of its independent luster over the last couple of years giving in to the “brand over band” commercialism of corporate sponsors. We can attest to watching the latest buzzy indie band on a giant Doritos stage off Sixth Street and thinking, “Is this a scene from Portlandia?” The tech and film portion of the 10-day festival continues to grow tremendously and has overshadowed the music portion for some time now.

Still, there is nothing quite like hanging out with 2,000 bands from all over the world in the confines of Austin, Texas for seven days. Everyone should experience it at least once. If not for the breakfast tacos and Texas barbecue, then maybe for the relentless coolness of Austin’s 200+ music venues.

From a gig standpoint, SXSW can be intimidating and gratifying at the same time. It’s easy to get lost in the chaotic energy unless you’re booked into a high-profile showcase or venue. Otherwise you may experience the deflating feeling of no one showing up to see you. Stiff competition from major labels and large corporate sponsors can make it difficult for the average low brow show to get much visibility. Yeah, but you do automatically generate some bragging rights for having played SXSW.

“I’d say there’s potential to fast track the buzz that happens around a band. When you’re at SXSW you start to hear people talk about a band and then that band is brought up time and time again in all of the conversations you have over the course of just a couple days. Last year, I felt those bands were Idles, Shame, and Caroline Rose. It’s like taking all the press, Spotify playlists, and word of mouth methods that you usually find out about new bands and just cramming all of that down your throat over the course of a few days.”

“From the perspective of an independent artist there are pros and cons,” continues Justin. “You’re essentially competing with seemingly every single band in the country, all playing shows in the footprint of a few square miles. At any given time, there are probably 100+ different performances happening. On the other hand, half of the music industry is in town and it could potentially be a good way to get in front of some eyes.”

Using Rock of the Arts’ Top 12 most-streamed local bands of 2018 list as a guide, we checked in on who is playing SXSW this year.

Slow Pulp is still listed as being from Madison on their official SXSW showcase listing. They may have moved on to Chicago, but their heart is still somewhere on State Street or maybe in the basement of one of those house shows they performed at. The band’s track “Steel Birds” which came in at number one on our 2018 Spotify list is at almost one million streams. Slow Pulp gets the persistence trophy for performing nine shows over the course of five days at SXSW. Yikes! Three shows in one day. Get plenty of sleep and lay off the tequila.

Disq has raised their profile significantly with the release of the single Communication b/w Parallel on Saddle Creek Records in 2018. They even managed to get airplay on KEXP in Seattle. The Conor Oberst association with the label bodes well for the band spearheaded by Isaac DeBroux-Slone and Raina Bock. Word is Raina has taken a semester off from college on the West coast to pursue the opportunities opening up for Disq. The Stereogum Showcase is quite the prime gig.

Meg Golz and Eve Wilczewski amped up the guitars on their latest album “Big Dogs” and came in at #10 on our Top 12 Most-Streamed Local Tracks of 2018.
Let's see if Austin audiences pick up on their quirky pop anthems.

We salute Proud Parents for playing at the legendary Beerland, the best punk bar in Austin for the Dirtnap Records SXSW showcase. They will be joined by labelmates Fox Face, Mind Spiders, Radioactivity, Ten High and Drakulas. I love this place; cement floors with the no-frills ambience of an air raid shelter. Perfect!

Songwriter Hannah Switzer and drummer Lawrence Gamm started Labrador as a two-piece, weaving a delicate blend of deeply personal lyrics and a four-string tenor guitar that produces a very distinctive sound. With the addition of bassist Kent Genis and lead guitarist Grant Kempski, Labrador released an EP late last year and received some notoriety after being featured on NPR's Pop Culture Happy Hour.

(Editor's note: Labrador was added to this article after they contacted us on Twitter.)