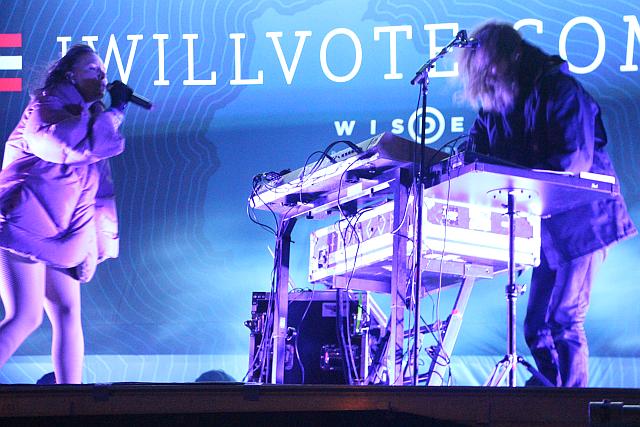 It has been a long time coming. Just eight months ago, independent touring bands made up a good portion of Madison's nightlife. Wilco, The Revivalists and legendary producer Steve Albini were all performing gigs in town the week of March 8th, pre-pandemic. Since then, there has been an avalanche of cancellations and furloughs impacting the live music industry directly related to COVID-19. The club, theater and festival circuits have come to a grinding halt.

The Wisconsin Democratic Party and Sylvan Esso provided a temporary reprieve from the live music drought with a Get Out the Vote drive-in concert at the Alliant Energy Center. Sylvan Esso has Madison ties to synth keyboardist Nick Sanborn who graduated from Middleton High School in 2001. The band has just released a new album “Free Love” with limited availability to tour due to the pandemic.

“This is the first time we've been able to play songs from the new album live,” remarked vocalist Amelia Meath clad in a heavy winter coat. Like many musicians across the country, live shows have been relegated to streaming online for much of the year. For most of us, it’s not the same as a concert in front of a physical audience, even if they’re sitting in cars.

Amelia tied the knot with Nick in 2016. The married duo has been putting music out together since forming in 2013. Veterans of major music festivals and wide-spread independent radio airplay, their numerous albums and EPs have garnered accolades and Grammy nominations.

The drive-in concert experience was a first for me. As you might expect, it’s pretty much like going to a drive-in movie with a large stage in front of you and a video screen on the side. This time though, I’m not drinking cheap wine and necking with my high school girlfriend. Tuning into 103.3 on the FM dial provided audio. Instead of cheering and clapping, people would honk their horns. Kind of like being in rush hour traffic between songs. 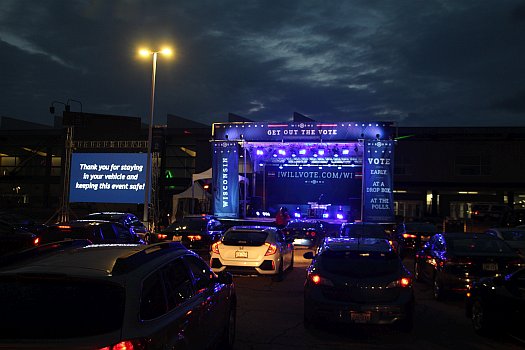 The temperature hovered around 40 degrees with a noticeable breeze picking up speed as the night progressed. Following the standard social distancing protocol, you were required to stay in your car and only venture outside to visit the restroom fully masked. We managed to get press credentials to cover the show and were able to take pictures outside of our auto as long as we wore masks and kept the requisite six feet of social distancing. We had to back our vehicle out of a space reserved for Lieutenant Governor Mandela Barnes who was one of the speakers earlier in the evening, along with Wisconsin Democratic Chairman Ben Wikler and State Treasurer Sarah Godlewski.

Sylvan Esso successfully bridge the gap somewhere between techno and pop, providing an intermittent dance groove through producer Nick Sanborn’s more ambient synth passages. Opening with What If, off the new album, Amelia’s distinctive vocal style is powerful and seductive. Die Young, Coffee and Radio, all fan song favorites, drew the most applause or in this case car horns. What did you expect from a drive-in concert? The 65-minute set was surprisingly long for a political event where artists usually play a couple of songs in between speakers. The Sylvan Esso tour bus was parked behind the stage in the Aliant Energy parking lot. Nick thanked their road crew who had made a special trip for the performance to show support for the new album and the election.

As the stage lights dimmed low, Amelia and Nick became black silhouetted figures against the pulsating rhythm, much to the delight of the crowd. People were hanging out of car sun roofs gyrating in the chilly night. Truly a surreal experience.

Watching a show in the pandemic age. Hopefully, we don’t have to wait another 8 months for more live concerts in Madison.