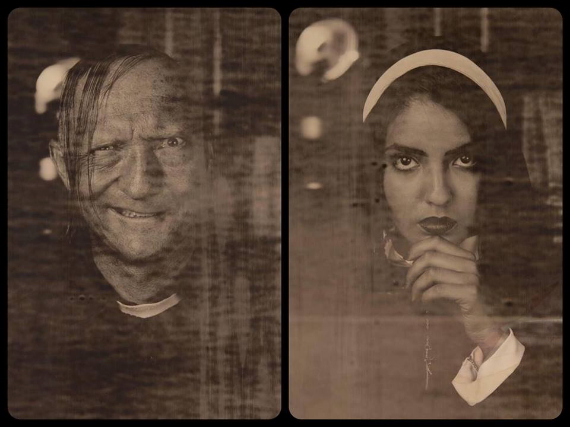 If you haven’t been to church in a long time because those Sunday morning masses can just be too early, there is still hope for you. All will be forgiven by checking out Mickey’s Tavern Saturday night for Reverend Beat-Man and Sister Nicole Izobel Garcia. Beat-Man is a Swiss rock ‘n’ roller who delivers a smoldering cauldron of grungy blues. The Cramps meet Boss Hog if you will. He also runs an independent record label called Voodoo Rhythm Records that is “a haven for misfits.” Delaney Davidson along with King Khan and the Shrines have put albums out on the label.

Beat-man tours solo quite a bit, but you're in for a treat this week as the infamous Sister Nicole Izobel Garcia from L.A. will be joining him on percussion and keyboards. Garcia has been known to dress in a nun’s habit and play drums ferociously while Beat-Man performs his blues trash sermon. Sing along with such anthems as the Jesus Christ Twist and Come Back Lord. Sure beats karaoke at the local dance club or that family-friendly Americana act at the coffee house. We were able to contact the holy duo for the inside scoop on the upcoming show.

What religious force drove you to become Reverend Beat-Man & how did Sister Nicole Izobel Garcia come into the picture?

BM – I was born Christian, went to Sunday School and church every Sunday as well. I love the story of Jesus and many others and how the church and religion can give hope to some lost soul. I have a brain as well myself and i found out that this is a totalitarian regime built on power over each other. You don’t believe in us, I cut your head off. Anyway, I thought I can do that too, so I formed my own church: the Blues Trash Church. My rules are No Rules at all and I believe every human is individually interesting. We are not sheep. We are wolves. We love rock ’n’ roll. We trust each other and we love and rock each other. We don’t kill, and we fuck like rabbits. Five years ago, I went with my Mission to L.A. and found a lost soul in a dirty rock ’n’ roll club downtown. She said she plays the church organ and can hit things. From then on Nicole Izobel Garcia became part of the flock.

I hear there is holy water available at your shows. Do you also offer communion?

BM - The holy water I drank yesterday. It’s all gone now, and i don’t do communion. What I do is Exor- and Inxorcism of Satan, Jesus, Buddha, Allah and whatever else you call them these days. I make people see the light for the first time. In each show we turn a lost sweet angel into a wild rock ‘n’ roll beast.

What is the most common reaction to your live show?

Beat-Man, you have a record label Voodoo Rhythm Records. What do you look for in Artists that you would like on the label?

BM – I’m fed up with the record industry. The top 100 bullshit or Live Nation who takes over all the venues, radio stations and festivals, just to play the same bullshit over and over again. I have a very small label, but we are connected very very well. We have an independent distributor in most of the countries all around the globe (USA - Cobraside). What I wanna do is show the people around the globe, and in my town, that there is a lot of other music that does not have to be in the mainstream. It can be very different and very strange, but I promise you that you’re gonna love it or at least it will move you. This is what I want to do with my label. I know the way to commercial success is to get on big stages and all that bullshit. I just don’t care about all that. Don’t want it! Music is like a human being. We are all different. This makes us interesting and so is my label.

Any insight on the Swiss underground music scene?

BM - Oh yes this is very strong, I’m from Bern, the capital of Switzerland.You may never have heard of this town and this is ok. It’s a very small big town, but it's politically very active with street demonstrations, squats and a blooming underground music, theatre, dance and art scene. I love it here and at the same time it can be very square and people are not so open minded. That’s why I have to get out of here a lot to tour the globe. In Switzerland, we don’t have a big rock ’n’ roll history. It’s all very local. We’ve had a couple of bands that made it commercially outside of Switzerland (the Young Gods, Celtic Frost, Krokus, Yello ) and of course all my swiss Voodoo Rhythm bands (the Jackets, the Dead Brothers, the Monsters etc).

Why should people come to see your live show at Mickey's Tavern in Madison on August 18th?

BM - Just because it’s boring behind the computer. You may find the girl or man of your life. We attract very hot people and the chance is big that you will not just see the light in the show, but as well have a great finale in the bed of a stranger. You can’t get all that sitting behind your computer all day.

IG - Can’t guarantee it’ll be good, but it will sure be something different. Also, I hear there’s gonna be a ton of free food and alcohol, hookers, drugs, raffles, etc.

In your opinion, what's missing from today's independent music scene?

BM - A lot of these independent bands are not independent at all. They are a slave to the industry. During the process of writing songs, they copy and do music that pleases an audience doing what they think can bring them a big success. Back in the ‘90’s, everybody wanted to sound like Gun Club or Nirvana. Then they wanted to sound like the Black Lips. Now, everybody wants to sound like Thee Oh Sees. Anyway, I love all those bands, but that’s their music. Why not create something that only you can do? I don’t get that it turns me off. I need more balls from bands these days. I like the new rap scene a lot. They are fresh and wild (ghostmane, Mykki Blanco, Ski Mask the slump god .. etc).

IG - Support from the people…. I live in Los Angeles and there are a lot of bands. Obviously… I’ve seen a few amazing local independent bands, only a few. And people just don’t go to the shows. People I know that supposedly “love” music and “hate” mainstream and are soooo into “underground” music… yet they don’t even want to pay $5 to see a great band.

What's the strangest gig you've ever had?

BM - The one at Mickey’s Tavern will be the strangest.

IG - We played in some weird basement and I was pissed off at Beat-Man the whole show so it probably sounded awful. Then we got kicked off the stage early because DJ Shithead showed up and we were actually relieved. Then we went to Taco Bell.

BM - We have on tour a record with all unreleased songs. We sell them only at the shows, no distribution, no nothing. From the band to the people, more direct. There are no final words. Life goes on and on and on and on. It’s never final.