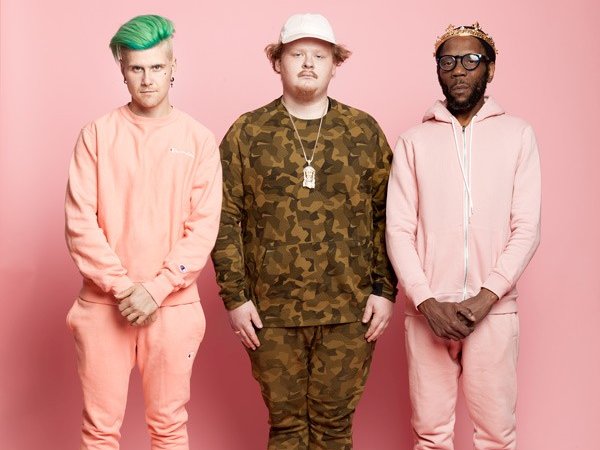 Leo Pellegrino, the energetic, dancing baritone saxophonist of NYC- based Too Many Zooz is chuckling about the idiosyncrasies of Internet fame.

“In Poland, the title of one of our videos translated to 'god level saxophone.' That was like my nickname and the name of the video," laughs Pellegrino. “There were posters of us and it said like 'God Level Saxophone' on it. I'm thinking, 'Oh my god. What a great thing to say.'"

Leo P as he likes to be called has come a long way since he hooked up with trumpeter Matt Doe and percussionist King of Sludge in New York City’s 14th Street subway station several years ago to busk for some quick cash. Videos of the trio’s self-proclaimed brass house infused sound garnered millions of YouTube views and led to a performance with the Dixie Chicks at the 2016 CMA awards, and backing Beyoncé on her "Lemonade" album. Too Many Zooz has now emerged from the subway to sold-out club and festival dates with the European record label Ministry of Sound releasing their single “Warriors” to ravenous fans.

The heart of the Too Many Zooz experience still lies in their chaotic live shows with Leo P in a frenzied zone of half-kicks and sax solos. How does he maintain that intense energy level out on the road?

“Sleeping, exercising and drinking water. Eating like decent food. Throw in a salad just because. Just try to eat the spinach and stuff. You know what I mean? Just give me an effort. It's the best way for me to have a good show. When I'm on the road, I'll do soundcheck, go work out and eat. I can't eat within two-and-a-half hours before the show or I'll cramp up.”

Too Many Zooz and the Brasshouse genre has also garnered respect from some influential people. Leo P was invited to perform with the Metropole Orkest at the BBC Proms in the Royal Albert Hall in London to honor American Jazz Legend Charles Mingus. Check out the video of Leo P sonically raising the energy level in the room as only he can.

The band has been on a roll and is feverishly trying to morph the internet fame into a more sustainable business model, but there have been some unforeseen bumps in the road.

"A big issue with my life and the band's life has been that we don't own the things that have become popular of us. It was only like two years ago that we had videos that we owned having over a million views. All the first videos, we have no control over, so it's almost like we're more famous than we are popular. I've been in a small town like a Missoula, Montana and been in a coffee shop. Someone came up to us and said 'Are you the subway band?' I will say 'Yeah' and they say 'Oh my god! Why are you here?' I tell them we're doing a show. That's one of our issues. A lot of our fans don't necessarily know who we are because one of those videos out there that got really popular doesn't have any mention of us being a band with a link to our website.”

The band has since consolidated all their videos into a central official website in an attempt to harness the viral monster that's put them on the map. Too Many Zooz has also dabbled in commercials.

"We were on a Tylenol commercial for a second. It was a clip of us playing in France and I was doing a jump kick and the announcer says 'This guy needs Tylenol.’ We had a much more prominent commercial for the Google Pixel with a video of us called ‘Bedford’ in a New York subway."

This will be the third appearance of Too Many Zooz in Madison. The band did an aftershow party at the Majestic during Live on King Street in 2017. They came back last year to sell-out the High Noon Saloon. Tuesday’s show at the Majestic promises to be a rambunctious evening of fun. Trent Prall aka Kainalu, who made our top 12 most-streamed local artists of 2018 list, will open the show.